The 8 of September the Brotherhood of Our Lady of the Castle, also called Our Lady of the Shepherds being this union which traditionally formed it, celebrates its celebration . It says the tradition that was a shepherd who discovered the image in a well. Formerly there was an ermita˝o, that also took care from shepherd of a flock property of the brotherhood. 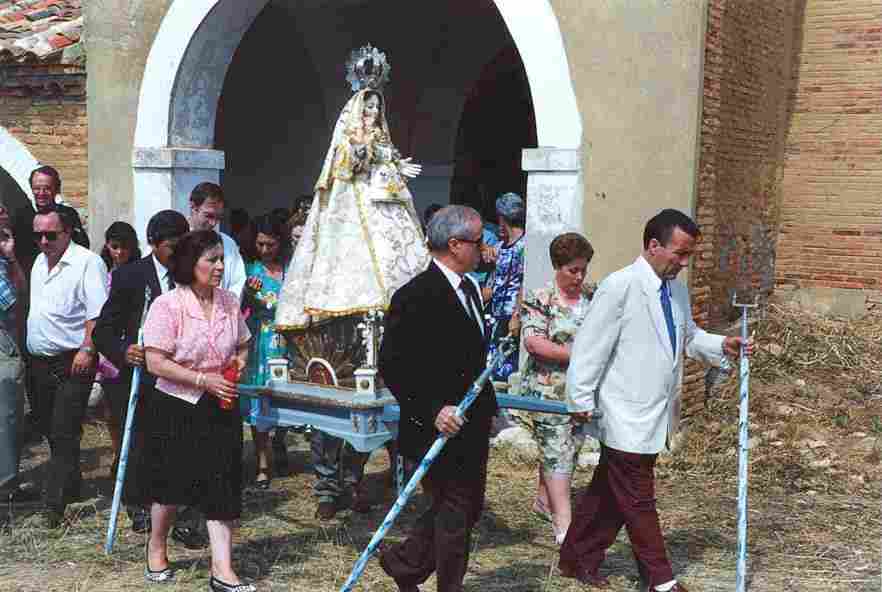 The Sunday following the 8th of September is celebrated "El Voto", vote of village in thanksgiving to the Virgin of the Castle when neighboring and visitors go to the hermitage, and that is the main day of local celebration in Tamariz. The previous days to the celebration it is custom to celebrate a "Novena" to the Virgin, in which the Joys ("Gozos") are sung, sample of devotion of the town of Tamariz.

The Brotherhood of San Antˇn had its titular celebration the 17 of January, with mass in the Church of San Juan and procession. With the image of San Antˇn in the door of the church there was always somebody that on a horse or in a mule said "refranes", that is to say, critics to events happened in the town, that began with " Oh glorious San Antˇn... ". In the refreshment of the brothers the main element was the dry figs, as well as in the one of the SantÝsimo - that acted the Corpus and the following Sunday they were the hazelnuts.

The Brotherhood of the Cross celebrated its celebration the 3 of May. A Christ appeared in the procession. The brothers indicated, without nobody seeing them, the doors of their members with an red cross.

The 1st of March, day of the Angel, mass was celebrated in the Hermitage of Our Lady of the Castle. The children requested by the houses the egg and the orange, preparing themselves with eggs a "tortilla" for eating in the afternoon by groups, families... in the country or in a threshing floor.

The day of the Corpus, the young people cut branches of flowery trees and they placed them in the windows of his fiancees. Also arcs made of branches were placed at the door of the church for when the procession came out. There were made altars in the streets at the door of the houses of brothers, with carpets extended placing children so that they were blessed when the SantÝsimo passed.

The day of the Candles (2 of February) the draftees ran the ribbons ("cintas") with horses and put it in the arm to their fiancÚes or the owners of the horses. There was one ribbon, called of the preference that was painted or embroidered for this aim. The person who obtained it was considered lucky.

In the region the town is known as "Tamariz of the Devils", but their neighbors name it of the Angels.

The people from Tamariz are called "escri˝eros", because there was an industry of "escri˝os" (a kind of basket), and they wanted to make a tower with them that arrived to the sky, and as they needed one to finish it, cleared the one of down, because it was the one that less was seen, and the tower fell. From there comes the song:

It is said that a poor man, nicknamed " the Candy ", requested by the neighboring towns, repeating obsessively: " Poor of me, who will take to Tamariz ". The phrase became so popular, that it was heard in Madrid.

Tamariz de Campos: village with city council in the province of Valladolid (8 leguas), judicial party of Medina de Rioseco (2), diocese of Leon. LOCATED at the left margin of the Sequillo river, with good ventilation and healthy CLIMATE. It has 400 Houses; the consistorial one, school of primary instruction, pˇsito pÝo, 2 parochial churches (San Juan and San Pedro) and 2 hermitages. It borders LIMITS with those of Villabaruz, Gatˇn, Castril de Vela, Moral of Reina and Villanueva of San Mancio; within it and on the foot of the population is a quite extensive lagoon; the LAND flat to a large extent and fertilized by the Sequillo, is of good quality. WAYS: the local ones and the one that crossing a bridge that crosses this river, lead to head of the party, in which the mail is received and dispatched. PROD: Wheat, rye, barley, oats, pulses and vegetables; grows up wool cattle, mular and asnal. IND: the agriculturist; some neighbors dedicate themselves to make baskets, and they do not lack several of the offices and more indispensable mechanic arts. COMMERCE: export of leftover from fruits to the markets of Medina de Rioseco, and import of the articles that lack. POBL: 91 neighbors, 367 souls. PROD. CAP.: 605.000 RS. TAX: 60,500. CONTR: 42.537 RS. 20 mrs.